The store will not work correctly in the case when cookies are disabled.
Menu

Which magnesium is suitable for me?

More and more people are convinced that they need extra magnesium. But which magnesium is the most suitable?

Zechsal works with three types of magnesium - chloride, citrate and bisglycinate - all three of which deserve the label “good to excellent” in terms of absorption and availability for the body. We know from the literature that there are differences in the functioning and effectiveness of these types for certain complaints.

Before you make a choice - for one of the types or a combination - here's a few tips to take into account when restoring your magnesium balance:

•   The amount required is personal and depends on many factors. You can - within wide margins - try out how much of which type suits you when. The self-diagnosis packs can help with this.
•   Your daily needs may vary. For example, a lot of exercise, stress or use of medication results in a higher magnesium requirement.
•   Magnesium is the conductor in your body and determines how well other vitamins and minerals are absorbed or used.
•   When in doubt, always consult your doctor or therapist.
•   Several connections next to each other: great!
•   Possibly too much magnesium leaves the body naturally through the kidneys or through perspiration. 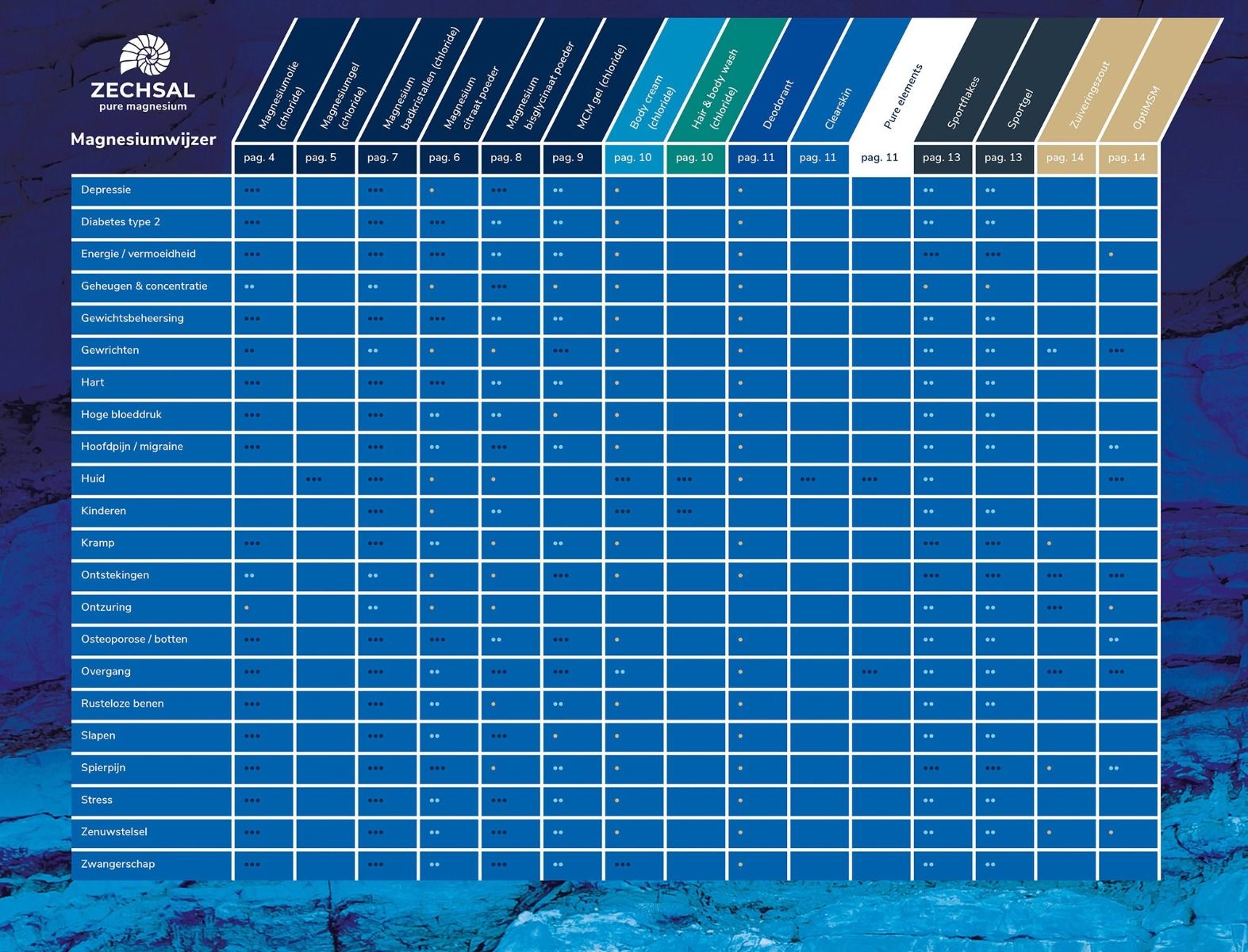 Would you like more background information about why? Read more about the literature and background of the different types of magnesium below.

Although also easily absorbable through the gastrointestinal system, magnesium chloride is most commonly used for transdermal absorption, the absorption through the skin. This form of supplementation has been used since ancient times. The Romans already took a beneficial bath in the Dead Sea. So, the cures in salt springs has been around for centuries and is still a recognised part of well-being and health in many parts of the world.

Since 2008, there has been an advance of transdermal magnesium in the home situation. This is due to a combination of a number of factors:

•   Publications on the superior bioavailability of transdermal magnesium chloride.[1]
•   Greater awareness about structural magnesium deficiency among large parts of the world population.[2]
•   Exploitation of magnesium sources for supplementation.

This last point has been true for some time for the Dead Sea and to a lesser extent for the Salt Lakes in the United States. A major boost was the availability of the magnesium from the Zechstein source from 2008. This magnesium chloride, which was soon given the predicate "from the purest source in the world", has since been on the rise.

While there is still no compelling scientific evidence for the degree of transdermal absorption, more and more people are embracing this magnesium and the transdermal absorption form. The fact that it is a pure natural product with, in addition to a high content of magnesium chloride, a unique mix of trace elements, undoubtedly helps with this. Possibly more important are:

For oral use, the so-called "organic" forms are dominant in the range. In addition, the "inorganic" ion to which the magnesium is bound has been replaced in a process by a substance from living nature, an acid or an amino acid. From this manufactured compound there is then in pill or powder form a better absorption in the body compared to the natural inorganic forms. This with the exception of magnesium chloride and, to a somewhat lesser extent, magnesium sulphate.[3]

The latter form is used medicinally (intravenously). The use of magnesium sulphate instead of the body's own magnesium chloride has more historical than medical/biological reasons.[4]

Within the organic forms for oral use, the citrate compound is one of the oldest and most widely used. The citrus connection is logical and the effect on muscles and joints in particular is good. It also provides more energy. A disadvantage is that gastrointestinal problems can arise.

The latter is less the case with magnesium bisglycinate. This special amino acid compound is very well absorbed. The gut-brain axis is attributed an important role in its operation. This explains that it mainly has a positive effect on memory, concentration, nervous system, learning ability and mental relaxation (anti stress)[5].

[1] See, among others, "The Magnesium Miracle" by Dr. Garolyne Dean and "Transdermal Magnesium Therapy" by Dr. Mark Sircus.

[3] Schwalfenberg, G.K., Genuis, S.J. “The importance of magnesium in clinical Healthcare” in Scientifica 2017